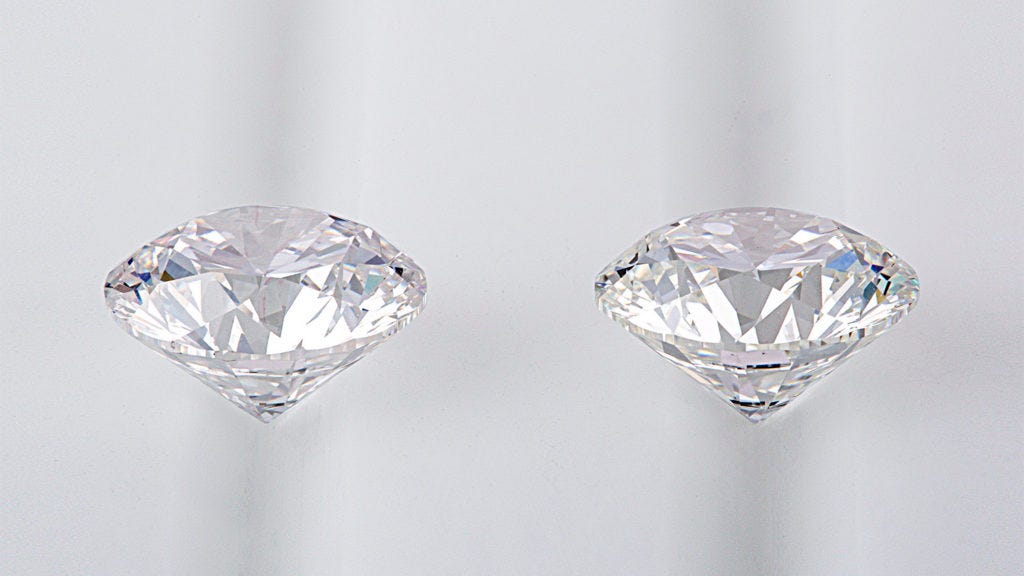 Can You Spot The Difference?

Both lab and mined diamonds have the exact same chemical and physical properties. They look exactly alike and test as diamonds because they are!

Lab grown diamonds are simply made differently. Imagine you have two people taking care of an identical plant; one person is growing it outside using natural sunlight and the other is using a lamp inside. They are both still the same plant! Created diamonds sometimes get a bad rep when it's totally undeserved.

Did you know that in order to find just one carat of diamond, approximately 200 to 250 tons of Earth must be sifted through? That's a lot of heavy machinery burning through a lot of fossil fuels. Not to mention, diamond mines cause huge holes to be left in the middle of communities. In addition to the enviornment, mined diamonds also contribute to the abuse in child labor. 215 million children are estimated to be working in exploitative conditions such as the mining industry. Not only that, they also work in the cutting and polishing factories. Children are often given the most difficult jobs like entering narrow mineshafts or descending into pits because of their small size. They are also believed to have better eyesight and fine motor skills for the factories. The hours are grueling, and prevent the children from going to school. The physically demanding work puts great tolls on their bodies and often leaves them handicapped. With lab created diamonds you will never have to worry about the use of child labor.

Labs use one of two methods of growing diamonds: High Pressure-High Temperature (HPHT) and Chemical Vapor Deposition (CVD). The HPHT method is when a small diamond "seed" (a single slice of a diamond about as thick as a human hair) is placed into a piece of carbon and either a belt press or a cubic press is used to pressurize it with approximately 1.5 million pounds per square inch. The carbon is also exposed to over 2,700 degrees Fahrenheit, and this combination of pressure and heat melt the carbon and form a diamond around the initial seed. The product is then cooled and ready to go. Alternately, The CVD method uses the same seed that would be used in the HPHT method. It is placed inside a chamber then heated to 1,400 degrees Fahrenheit and filled with carbon-rich gases (like methane and hydrogen). The gases are then ionized into plasma much like a microwave works. This basically breaks down the molecular bond of the gas, and carbon begins to stick to the seed and a new diamond forms. Treatments may also be used such as heat or irradation to enhance or change the diamond's color after it's grown. Lab diamonds typically take less than a month to grow, opposed to the billions of years it takes for mined diamonds.

Lab grown diamonds are also better for your pocket! They can be up to 40% less expensive than traditional mined diamonds for the exact same quality. They come with grading reports just like mined diamonds do. These reports consist of a grade for each of the 4 C's (Cut, Clarity, Color, Carat) as well as verification that it was grown in a lab. It takes a well-trained gemologist and sophisticated equipment specifically designed for identifying lab grown diamonds to differentiate between the two. No one can tell the difference with just the naked eye!

Everyone has their own opinions on lab vs. mined diamonds, but don't be confused...lab grown diamonds are REAL diamonds without the cruelty and upcharge!