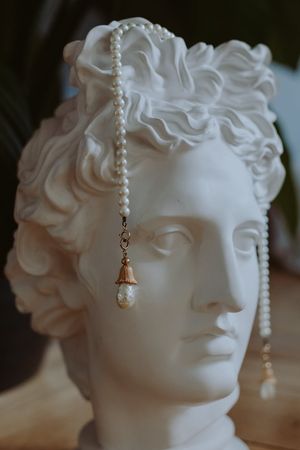 Unmatchable elegance and timeless beauty are excellent descriptions of the pearl. June's beautiful birthstone (though pearls are not considered stones, they are gems) is a classic white pearl. Pearls are the ultimate sign for wisdom and serenity- they're also known to convey a sense of safety to the wearer. Pearls represent innocence, purity, loyalty, and integrity. Pearls are also believed universally to attract wealth and good luck, and are often presented as a token of affection and love.

In Hindu folklore, pearls are described as dew droplets which formed and fell from the sky during the dark of night. The droplets then fell into the dark waters of the ocean, creating the Hindi folklore behind pearls. In Ancient Greece, pearls were described as the tears of the Gods; this is also where the practice of a women adorning pearls on her wedding day began. It is believed if a woman wears pearls on the exact day of her wedding, the gem prevents the woman from crying (no matter if they are tears of joy or saddness). Pearls are also known as sacred gems in Christian belief during the middle ages; the belief being that the pearls covering the rim of the Holy Grail would naturally purify the water within the grail. It was also believed that biblically, Eve's tears created white pearls and Adam's tears created black pearls. Black pearls (also known as Tahitian Pearls) are extremely rare and somewhat difficult to obtain; black pearls have similar lure as the classic white pearl- though Tahitian Pearls come in amazing hues of black, green, and silver all within one perfect pearl.

The practice of women wearing pearls on their wedding day still exists to this day which is mostly based on their elegance and idealism of innocence and purity. Pearls elevate any outfit that they're worn with, creating an air of classic beauty and elegance to wearer. Those born in the month of June are lucky to have such a timeless piece to represent them; but anyone who owns a pearl cannot deny their simple beauty and signifigance.